On April 19, 2021, tests of the CARDIOVICE ECG Recorder product together with the CARDIOVICE App software for compliance with Directive 93/42/EEC for Medical Devices were completed. The tests were carried out by the TÜV Rheinland InterCert Kft. accredited laboratory in Budapest.

As part of the research, tests were carried out to confirm the basic safety and basic functioning of the medical electrical device in accordance with the following standards:

The tests were supplemented by electromagnetic interference tests in accordance with IEC 60601-1-2:2014.

The tests of the CARDIOVICE ECG Recorder together with the CARDIOVICE App software have been completed with a positive assessment and a recommendation to issue an EC certificate.

Based on the research carried out, the Company has also received CB certificates, confirming the successful passage of both the basic safety test and the complementary test. CB certificates are based on the international agreement of IECEE members, which is considered the basis for certification in many countries of the European Union, including countries that are not yet officially member states. The advantage of the CB certificate is the possibility of obtaining control seals required in the country of destination, which opens the possibility of selling the product on a wider spectrum of the foreign market. 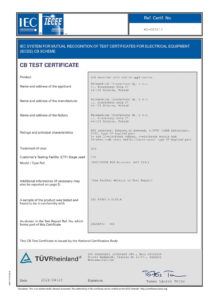 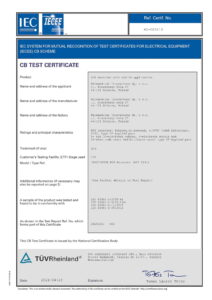